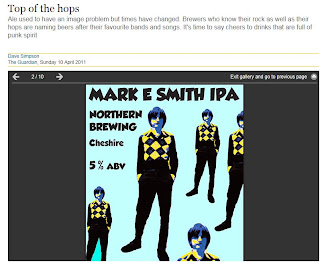 Much like good beer in restaurants, an article about beer in the Guardian is sadly a rare thing, so kudos to Dave Simpson (one of their music writers) for this round up of Rock music themed beer names/labels.

The list includes Revolutions brewery from Leeds whose every beer is rock themed. Special reissue beers tie in with notable rock anniversaries.

The other thing of note is that several of them relate to The Fall which is ironic firstly because Mark E Smith probably loathes your classic stereotypical Camra member real ale aficionado more than Half Man Half Biscuit do, and secondly because M.E.S. is your typical 50 something who started drinking lager in the seventies. Holsten for preference, if memory serves.

Update: Also appears in paper version of G2 as a nice two-page spread.

It was a nice surprise that for my recent birthday I got a rather good selection of beer from various friends and family. A most welcome mixture of old favourites and new exotics. I look forward to drinking them and sharing them over the next few weeks. In the selection nestling next to chocolate porters from the states and best bitters from just down the road were some bottles of Worthington's White Shield.


Now let me say from the start I LOVE White shield and will happily say it’s one of the world’s great beers. I came to it a bit late and my views may be swayed by my first pint being in the brewery tap, but if at any time someone suggests a bottle I am more than happy. I love its dry complex balanced taste, its look and appearance, I love its history and the whole Burton home of brewing thing. I’ve met the team who make it and they are wonderful knowledgeable people, who should be more widely known/praised for their skill and for a word I rarely use genius. In short I like White shield I just wish it had a better label. 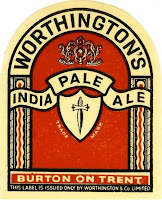 Now let’s be clear it’s not rotten like some we highlight here, it’s just undersells one of the world’s best beers. It's like a great lp in a rotten sleeve, a beautiful flower in a stained milk bottle, it's like picasso said "a great painting deserves a great frame, a poor one needs one".
It comes down for me to the lopsided "clip arty" shield it just looks sort of cheap and throw away. A beer like White Shield in part trades of its heritage and there’s nothing wrong with that especially if you helped preserve a whole style of beer and are linked back to its origins (even if by a circuitous route) and of course even famous brands like Guinness and Coke which appear to stay the same change subtly every few years.Quirky edgy labels are good for new beers that need to make their mark but they often don't wear well and WWS doesn't need to shout about its worth. I think something along the lines of the older style slightly ornate design could be in order perhaps with a larger less quirky shield but keeping the shield bottle caps they’re good. Anyway it’s been far too long since I had a bottle (all of 2 days) so keep up the great beer folks just tweak the label a touch.
*Robert Ludlum’s poorest ever selling title set in the beer offs of North Staffs...
Posted by BLTP at 10:30 am 12 comments: